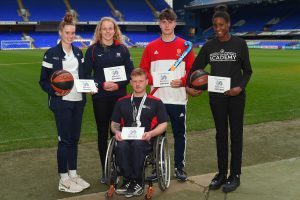 Eight super talented young sportsmen and women from Suffolk have received a major funding boost thanks to the Ipswich business community.

SportsAid helps young athletes to overcome the financial obstacles they face in their bid to become Britain’s next generation of Olympians, Paralympians and world champions. The cost of sport is one of their greatest challenges, and despite already representing Great Britain at competitions all over the world, most receive no funding beyond what the charity provides.

Research shows that it can be a costly business.

Adam Baker, a trustee with SportsAid Eastern said “A SportsAid athlete and their family will spend over £7,000 each year in meeting the costs of their sport. Without the charity's support, many of these young prospects, typically aged 12 to 18, would face a tough decision on whether to continue training and competing.”

“However, SportsAid couldn’t support young athletes without the generous support of a range of partners, from local businesses and charitable trusts to global brands such as the Royal Bank of Canada.In Ipswich six local businesses have put in a huge amount of effort to raise money to enable SportsAid to support more young people from the county.”

Malcolm McGready, a partner with Ensors Chartered Accountants, said “SportsAid does a brilliant job in helping the most promising young British athletes by providing them with financial support, recognition and personal development opportunities when it matters most - at the very start of their journey towards becoming the next generation of sporting heroes.”

I know I speak for all the businesses involved in the Ipswich Sporting Lunch Club when I say we are proud to support this wonderful cause and help Suffolk sportsmen and women to fulfil their potential.”

Phoebe Hayden, a young rower from Stowmarket who is part of the British Rowing’s Women’s Under 18 squad, said “Receiving this award means so much to me, and I am so grateful for the support of SportsAid. It really does make a difference to me every day, allowing me to get the best out of my training programme and continue to compete at elite level.”

Commonwealth Games Para Powerlifter Nathaniel Wilding commented "I have a major competition in 6 weeks in Hungary and possibly another 8 weeks after that another one. If it wasn't for the help of SportsAid I’d not be able to continue to do the sport I know and love.”

The next Ipswich Sporting Lunch Club event takes place on Friday 20th September 2019 at Wherstead Park. The guest speaker will be Charlotte Edwards CBE, one of the most significant female cricketers of all time. For further information contact SportsAid Eastern Trustee Adam Baker at adam.baker@suffolk.gov.uk.

Member of the British Rowing Women’s Junior Under 18 Squad

Member of the England Under 18 Boys Squad

Has previously represented England at Under 16 level against Holland, Spain, Ireland and Belgium.

Has represented GB at Under 16 and Under 18 levels and is currently in the Under 18 Squad hoping for selection for the European Championships.

Represented GB at Under 16 level last year and is currently in the GB Under 18 squad hoping for selection for the European Championships in Macedonia.

Currently in the Under 16 squad hoping for selection for The European Championships in Bulgaria.

Made his Commonwealth Games debut on the Gold Coast in 2018 securing a 5th placed finish.

Won gold in the 2017 Para Powerlifting World Cup and silver at the 2018 European Championships.

In 2018 Lily won the Scottish Women’s Open, finished 4th in the English Women’s Stroke Play and 3rd in the Welsh Ladies stroke play. She was also selected as one of the youngest members of the Great Britain and Ireland Curtis Cup team. She as represented GB at the Youth Olympic Games.

Before they become a household name, an elite sportsman or woman will spend 10,000 hours and thousands of pounds pursuing their dream. Many are forced out long before it comes true.

SportsAid makes it possible for young athletes to pursue their dreams, so that – like 18-year-old Steve Redgrave in 1980 and 13-year-old Kelly Holmes in 1983 – they can one day go on to inspire a nation.

At London 2012, almost two-thirds of the British team were former recipients of SportsAid’s support, winning 20 Olympic and 27 Paralympic gold medals between them. For many, SportsAid were their only means of support at a crucial, early time in their career, before other sources of funding are available. SportsAid continues to work with the governing bodies of 50 disciplines to ensure the right athletes receive support.

SportsAid Suffolk was established in 2007 as a legacy from the London 2012 Olympic and Paralympic Games, to support individuals with cash awards in the defining early years of their careers.  Since it was launched SportsAid Suffolk has made in excess of 200 grants to talented athletes from the county distributing over £200,000.  SportsAid Suffolk is proud to have supported six of Suffolk’s London 2012 participants including both medallists (boxer Anthony Ogogo and powerlifter Zoe Newson), Glasgow 2014 Commonwealth Games medallists Chris Walker-Hebborn and Harry Martin and all Suffolk’s representatives at the 2016 Olympic and Paralympic Games.