This week marks 35 years since Dave Collins, Client Services Director at Pound Gates joined the insurance industry. In fact his first day at Sun Alliance was on his 16th birthday, so yes he has just turned 51!

Here we spend 5 minutes finding out more about his insurance career, as well as his charity work, love of the beautiful game and future plans.

Dave, firstly happy birthday and happy work anniversary! So what have you been doing for the past 35 years?

My insurance career began in the post and filing room at Sun Alliance in Ipswich. It was a great place to start as I got to know everyone very quickly. Within six months I moved into an underwriting role in the Commercial Accident department. After a few years I then progressed to a technical underwriting role in the Multi Risks department looking after our largest clients.

When Sun Alliance and Royal merged in 1996 I had the choice to continue within underwriting or switch to sales. I chose sales, which was a big change. I was given a panel of brokers to manage and funnily enough Pound Gates was one of them. After 10 years in the role and 21 years with the company, I was approached by AXA to manage the sales team for the Eastern region. I felt it was time to leave and take on my first managerial role with a team of seven. Over two years later the role changed and I got the opportunity to move to Pound Gates and try broking for the first time. Initially I was given a book of business to manage as well as being responsible for our insurer relationships. I knew how insurers thought and worked so it was a great fit.

Now I manage the Client Servicing team made up of 12 people. Our focus is on looking after clients, as the client servicing piece is fundamental to our service delivery. I’m also involved in the strategic direction of Pound Gates, but I always still enjoy going to see clients.

The truth is that I fell into insurance. When I left school the choice appeared to be banking or insurance. I knew I wanted to work in an office and when I was offered the job at Sun Alliance, with a starting salary of £3,200, it just felt right. I still remember that first pay cheque. It seemed so much money! I bought myself some fishing gear with it.

It’s been a great career and I’ve been fortunate to have had some amazing opportunities and experiences through it. There have been many ‘jollies’ over the years so I have been lucky. Most importantly I have met so many good people over the years and some will be friends for life.

You’re known at Pound Gates as Doing Good Dave. What’s that all about?

Ha! Pound Gates itself is extremely philanthropic and there are lots of ways to get involved in that. I’m a Trustee of The Soma Leo Foundation, a charity set up by Pound Gates, which supports a school in Kenya. I help to ensure funds are raised through events such as our golf day and annual quiz.

I’ve also worked with Age UK for over five years through their telephone befriending programme. I was paired with a 90 year old man who I called every week for about 20 minutes. We always talked football amongst other things. I always heard his voice lift when I called. He died earlier this year at the age of 95 and I am so glad I volunteered to do this and able to help in a small way.

Yes, I do love football. I’m a long suffering Southampton fan! But grassroots football has my heart.

I am currently Chairman of AFC Kesgrave. I joined the club in 2009 as an Under 8s coach. My son wanted to play and I was happy to help out. But I quickly became Manager. I then spent nine years as manager and found it extremely rewarding.

AFC Kesgrave is a big club with 23 teams, ranging from under 8s to under 18s in youth football; we have three adult teams, a vets and a ladies team. The whole spectrum is covered and we have around 500 players.

The big news for the club, which currently doesn’t have its own home base, is that we have submitted a joint planning application with Suffolk Agricultural Association (Suffolk Show) to lease some of their land for grassroots football. If the application is approved Trinity Park will become our new HQ. The land that we hope to lease was last used for football around 20 years ago. It will be fantastic for the club if the planning gets approved. Just being able to play all of our matches in one location will bring the club much closer together. I’ve been working on the project for around 18 months now and we hope to hear the outcome later this month. There is an article about the project which you can read here.

The other (not quite as) big news is that I’ve now retired from competitive ‘vets’ football. But I still attend a ‘kickabout’ every Thursday evening so will get my fix then.

Up until the pandemic I was always pretty active. I love playing golf (I’m a member of Brett Vale Golf Club and play off 14), and also play squash and tennis. I enjoy fishing and walking the dog – anything outside. At the start of 2020, six months out from turning 50 I planned to ‘Get Fit for 50’. I wanted to lose three stone. Three months in I was right on target, but it’s all gone back on now. I’m slowly getting back into everything and hope to start shedding some pounds again soon. 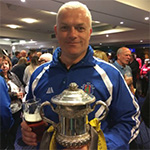 What is your advice to anyone starting out in their career now?

Get your work/life balance right. I’ve always believed this and it’s only become more important over the past year or so in light of Covid. Pound Gates has always supported a good work/life balance and that’s not always the case in this industry. I believe people should do their best while they’re working, but then forget about it and go home and have their own / family time. If that’s not working there is something wrong with the business.

Covid has helped me to value the little things even more. I no longer take for granted the time I get to spend with friends and family. Even having drinks in someone’s back garden feels like such a treat now. I think life isn’t about money but rather time and who you spend it with. Covid changed my outlook and what I want out of life. What was previously a bit of a daydream has now become a firm plan to buy a motor home and travel around the UK. My wife and I are particularly excited about touring the North East 250 in Scotland when we have both retired.

My two sons are now grown up. My eldest is studying Sport & Exercise Science at the University of Essex and my youngest is about to start an IT apprenticeship at Ipswich School. That just leaves our Sprocker Alfie, who joined the family in January 2021, and has entertained us / kept us on our toes ever since!

Read more articles from our 5 minutes with... series. 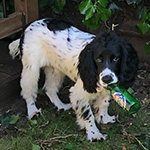